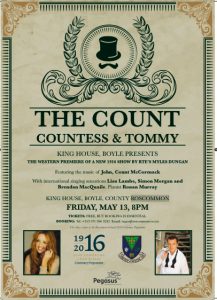 FRESH from her celebrated performance in the Laochra spectacular in Croke Park, singer Lisa Lambe heads to Roscommon this week for another stirring 1916 commemoration.

The former Celtic Woman star will join another famed soloist, Simon Morgan, on stage in Boyle’s historic King House for the western premiere of Myles Dungan’s new 1916 show The Count, The Countess & The Tommy – which centres on the life and music of the celebrated Irish tenor Count John McCormack.

Friday, May 13th is the date set for the King House show, which goes on to tour Dublin, Cavan, Leitrim and beyond – following a sell-out performance, and two standing ovations, in Kilkenny’s Watergate Theatre earlier this mionth.

The show is a centrepiece of broadcaster Myles Dungan’s Paths To Freedom roadshow project, a unique package of lectures, presentations and shows remembering the Rising, one hundred years on.

The Count, The Countess & The Tommy is hosted by Roscommon County Council, as part of an extensive programme of events to commemorate Easter 1916.

The show, written specially for the 1916 commemorations by RTE historian and broadcaster Myles Dungan, is a blend of song and drama, featuring the music, not just of McCormack, but also Lena Ford, Ivor Novello, Stanley Kirkby and George M. Cohan. Produced by Pegasus Consulting, the promoters behind The Great War Roadshow and The Fighting Irish, the Watergate performance will feature headline acts including Simon Morgan, Lisa Lambe, Brendan MacQuaile and pianist Ronan Murray.

The Count, The Countess & The Tommy

On Friday, May 20, King House, will also welcome a selection of top-class speakers, academics and personalities for a series of presentations on the changing nature of Irish politics, work, class and gender roles in the years leading up to independence, explaining that the Rising was part of a wider narrative, not the whole story.

10.15 Catriona Crowe Ireland Before The Rising

11am John O Keeffe The Psychology of The 1916 Leaders

Tickets for these two exciting events are free, but booking is essential.