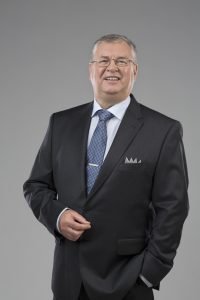 Broadcaster Joe Duffy will be the guest of honour at a special event in Dublin marking the centenary of Irish women winning the right to vote.
The Liveline presenter, author of the best-selling book, Children Of The Rising, will join historians Liz Gillis, Sin ad McCoole and Dr. Kate O Malley for a full-day event in the Civic Theatre, Tallaght, exploring the changing lives and roles of Irish women in the early years of the 20th century.

The event is part of the Red Line Book Festival 2018, which runs from October 8-14. In a series of fascinating lectures and discussions on how times have changed for Irish women in politics and society, the speakers will discuss…

The annual Red Line Book Festival is a celebration of all things literary; be it spoken, written, played, illustrated or even just thought. The Festival runs in October, taking place in various venues across South Dublin County and is funded by South Dublin County Council and managed by South Dublin Libraries and Arts. The programme showcases the best of national and international contemporary writers and performers. The Festival co-ordinators are Bernie Meenaghan, Helen McMahon and Mark Ward.

Historian Liz Gillis is the author of numerous books on Ireland s early 20th century revolutionary period. Her latest work, The Burning of the Custom House (2017), tells the story of the IRA s 1921 attack on Dublin s Custom House, then the heart of the British administration in Ireland. Liz, a central figure in the new Pegasus history roadshow, Mn na h ireann, has a Degree in Irish History and worked as a guide in Kilmainham Gaol, developing a revolutionary walking tour of Dublin’s Liberties. She now works as a researcher on The History Show, on RT Radio 1.

Dr. Kate O’Malley is a historian with the Royal Irish Academy, and an Editor of the Documents on Irish Foreign Policy (DIFP) series, an RIA project in collaboration with the Department of Foreign Affairs and the National Archives of Ireland. She is a graduate of Trinity College, Dublin (BA, PhD), and has taught at TCD, UCD and Queen s University, Belfast. She has written extensively on Indo-Irish relations, authoring the book Ireland, India and Empire (2008).

Sinead McCoole is the author of many books including No Ordinary Women and Easter Widows, the untold story of the wives of the executed leaders. She is a member of the Government’s Expert Advisory Group on the Decade of Centenaries. She was Historical & Curatorial Advisor of the award winning 2016 National Commemoration Programme and Curator of the travelling exhibition: Mn 1916. The accompanying book was published in 2017 (Government Publications), She has curated exhibitions on Irish history & art in both Ireland and the US. A broadcaster and scriptwriter her work includes Guns and Chiffon and A Father’s Letter based on her work is part of the After ’16 Irish Film Board shorts commissioned for the centenary. She is currently curating the centenary exhibition on 100 years of women in politics 1918-2018 which will be in Dublin Castle from October 2018-January 2019 before touring to Ulster, Munster and Connaught.

Recent events…
KILLARNEY – The Alpha Male in Irish History
Why were there not far more women in positions of influence in Ireland in the immediate pre and post independence period
Myles Dungan thinks there is a very simple answer… MEN
RTE’s History Show presenter Myles Dungan will give a public talk in Muckross House, Killarney, Friday, May 18.
http://www.muckross-house.ie/muckross/muckross-events/alpha-male-irish-history/

LAOIS – Cumann na mBan
Author and historian Sinead McCoole will give a talk in Portlaoise Library on the forgotten revolutionary women of Laois.
Tuesday 22 May, 7.30pm.
CAVAN Public lecture
RTE’s History Show reporter Liz Gillis will give a lecture on May 31.
Guardians of the Revolution: Cumann na mBan 1917-1918 outlines the vital role that women played in the Easter Rising and beyond. Although often overlooked and seen as being mere supporters of the Rising and the revolutionary movement that followed, this talk aims to show that these women were educationalists, socialists, community workers, radicals, feminists and realists – all with a desire for one thing in common; Independence for Ireland. Through their participation they proved their worth and showed that they were indeed the invisible army of the Revolutionary movement and without their dedication and resolve, the events of Easter week could have faded into memory. Highlighting many of the lesser known women, the talk will show that the women were vital revolutionaries who gave their all in the hope of a better future for their country.