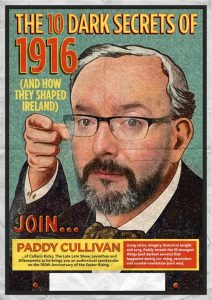 WRITER and performer Paddy Cullivan has joined the Pegasus team.

Paddy, best known as the leader of the Late Late Show House Band – and also the Camembert Quartet – is also one of the country’s best-known, and most-respected MCs.

In 2017, Pegasus will be offering Paddy’s new touring show – Dark Secrets of the Irish Revolution – to theatres, festivals, hotels and country houses both in Ireland and internationally.

This 90-minute satirical/visual/history/music show has been a great success in Ireland since premiering at the Limerick Spring Festival of Politics and Ideas in April, 2016. A highly engrossing show combining song, satire, hundreds of striking images and stark historical insight, it leaves anyone who sees it shocked at how little they knew about the foundation myths of our country.

The show has sold out various venues, including…

Dark Secrets of the Irish Revolution

Paddy Cullivan of Callan s Kicks, The Late Late Show, Leviathan and Kilkenomics brings you an audiovisual spectacular a century after the Easter Rising. Using satire, imagery, historical insight and song, Paddy reveals the strangest things (and darkest secrets) that happened during our Rising, Revolution and Civil War. He also draws parallels with those events effects on modern Ireland in a story that unfolds like an addictive whodunnit

All these questions and more will be answered in Dark Secrets of the Irish Revolution.